God Is In Control 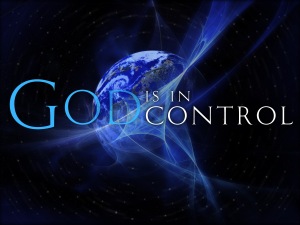 With the events in the world and this country today, it seems that things have really gotten out of control. Our nation is more divided today than anytime I can remember.  We’re divided among lines of gender, race, religion, political affiliation, socioeconomic status, etc., etc. With the Supreme Court’s ruling that the Constitution guarantees a right to same-sex marriage and the controversy regarding the Confederate flag, Facebook has looked more like a battleground of rock throwing and bashing than anything else.

Society today in the name of tolerance wants us to believe that we all worship the same god in many different ways.  However, the Word of God tells us in 1Timothy 2:5, “For there is one God and one mediator between God and mankind, the man Christ Jesus” and John 14:6 tells me, “Jesus answered, ‘I am the way and the truth and the life. No one comes to the Father except through me.’” I have to believe what the Word of God tells me.  There is only one true God and Jesus Christ is the only way to him.  I choose to believe the Word of God over what is socially acceptable.

In regard to homosexuality and the same sex-marriage issue, I have to admit that I don’t understand it.  I’ve always thought of it as a sin like any other sin that we struggle with and we all struggle with sin. So, in light of the recent controversy surrounding it, I went to the Bible to see exactly what the Word of God says about it, because there I can find Truth and I choose to believe what the Word of God says.

Genesis 2:18 says, “The Lord God said, ‘It is not good for the man to be alone. I will make a helper suitable for him.’” Genesis 2:24 says, “That is why a man leaves his father and mother and is united to his wife, and they become one flesh.”  Leviticus 18:22 says, “You shall not lie with a male as with a woman; it is an abomination.” Leviticus 20:13 says, “If a man lies with a male as with a woman, both of them have committed an abomination; they shall surely be put to death; their blood is upon them.”

These scriptures called these acts an abomination.  So, what’s the difference in sin and abomination? This is what I found:

“Sin” generally translates the Greek word harmartia. It means to err, to miss the mark or the goal. Harmartia and its related forms are the most general word describing that which is sin. In Hebrew, the word is chatta’ah, which means to miss a goal, to fall short of a standard, to make a mistake, or to sin.

The word “abomination” translates the Hebrew word pigguwl. It means something that stinks because it is rotten. It refers to something that makes you sick to your stomach just to think about. The Greek word is bdelugma which means a desolation.

I have seen many posts and comments calling homosexuality and same-sex-marriage an abomination which is exactly what the Word of God says it is.  So, I decided to research what God considers an abomination.  This is what I found:

Proverbs 3:32  “For the devious person is an abomination to the Lord, but the upright are in his confidence.”

Proverbs 6:16-19 “There are six things that the Lord hates, seven that are an abomination to him: haughty eyes, a lying tongue, and hands that shed innocent blood, a heart that devises wicked plans, feet that make haste to run to evil, a false witness who breathes out lies, and one who sows discord among brothers.”

Proverbs 11:20 “Those of crooked heart are an abomination to the Lord, but those of blameless ways are his delight.”

Proverbs 12:22 “Lying lips are an abomination to the Lord, but those who act faithfully are his delight”

Proverbs 15:8 “The sacrifice of the wicked is an abomination to the Lord, but the prayer of the upright is acceptable to him.”

Proverbs 15:9 “The way of the wicked is an abomination to the Lord, but he loves him who pursues righteousness.”

Proverbs 15:26 “The thoughts of the wicked are an abomination to the Lord, but gracious words are pure.”

Proverbs 16:5 “Everyone who is arrogant in heart is an abomination to the Lord; be assured, he will not go unpunished.”

Proverbs 17:15 “He who justifies the wicked and he who condemns the righteous are both alike an abomination to the Lord.”

Proverbs 20:10 “Unequal weights and unequal measures are both alike an abomination to the Lord.”

Proverbs 28:9 “If one turns away his ear from hearing the law, even his prayer is an abomination.”

Deuteronomy 22:5 “A woman shall not wear a man’s garment, nor shall a man put on a woman’s cloak, for whoever does these things is an abomination to the Lord your God.”

Now, if the Word of God is true, and I certainly believe it is, aren’t we all guilty? Proverbs 6:16-19 stands out to me when I read it. “There are six things that the Lord hates, seven that are an abomination to him: haughty eyes, a lying tongue, and hands that shed innocent blood, a heart that devises wicked plans, feet that make haste to run to evil, a false witness who breathes out lies, and one who sows discord among brothers.” How many of these seven things do we find in churches throughout the country today by those of us who call ourselves Christians?  How many times have we told “little white lies” to avoid speaking the truth because the truth may hurt someone’s feelings? Is there gossip and discord within churches today? Indeed there is! And how about Proverbs 16:5?

Church, this tells me that the world and even our churches are full of desolate people who need the love of Christ.  Romans 12:1-2 says, “I appeal to you therefore, brothers, by the mercies of God, to present your bodies as a living sacrifice, holy and acceptable to God, which is your spiritual worship. Do not be conformed to this world, but be transformed by the renewal of your mind, that by testing you may discern what is the will of God, what is good and acceptable and perfect.”  This scripture tells us to present our bodies as a living sacrifice that we may be transformed. Our entire body includes our mouths with which we call ourselves Christians while we spew out rumors, gossip and lies; it includes our minds with which we devise evil plans; our hearts with which we harbor pride, jealousy and resentment; etc., etc.  The problem is that we accept Christ into our hearts and instead of giving Him ourselves, our lives completely to transform us, we try to fit Him into our lives and our own personal agendas. We want to give Him enough to ensure our salvation without being truly transformed and seeking His will and purpose in our lives.

2 Corinthians 12:9 says, “But he said to me, ‘My grace is sufficient for you, for my power is made perfect in weakness.’ Therefore I will boast all the more gladly about my weaknesses, so that Christ’s power may rest on me.”  God’s Grace is sufficient to cover all our sins.  Far too many profess salvation and continue to willfully sin citing “His grace is sufficient”.  I believe it is but I personally don’t believe it’s possible for us to be touched by God’s Grace and not be changed because Romans 6:1-2 says, “What shall we say then? Are we to continue in sin that grace may abound? By no means! How can we who died to sin still live in it? God help us with this one. God help me with this one, because quite honestly, I still struggle sometimes.  I think we all do which explains why there is so much hurt in so many churches today.

The past few days, I’ve seen posts on Facebook aimed at sharing Truth, others at spewing judgment, condemnation and yes, even hate.  However, man’s judgment has never convicted anyone of sin; that is the job of the Holy Spirit.  Salvation and transformation come through Christ alone. Acts 4:12 tells us, “And there is salvation in no one else, for there is no other name under heaven given among men by which we must be saved.”

There are many things happening in this world today that I honestly never thought I would see in my lifetime.  However, they are happening just as the Word of God said they would.  I see many who are distracted and caught up in battles with each other and I am just as guilty as anyone else of this. My concern at this point, more than the battles over the Confederate flag or the Supreme Court’s ruling on same-sex marriage is the transformation and maturation of the Church; being fully cloaked in the full armor of God because the day of evil is rapidly approaching.

The truth is, this world is really messed up and I’m not capable of changing myself much less anyone else, the condition of the nation, or the world. Only the Lord is capable of producing the changes in me, in the Church, in this nation and in this world that need to be made. What I can do is fully surrender my life and “Finally, be strong in the Lord and in his mighty power. Put on the full armor of God, so that you can take your stand against the devil’s schemes. For our struggle is not against flesh and blood, but against the rulers, against the authorities, against the powers of this dark world and against the spiritual forces of evil in the heavenly realms. Therefore put on the full armor of God, so that when the day of evil comes, you may be able to stand your ground, and after you have done everything, to stand. Stand firm then, with the belt of truth buckled around your waist, with the breastplate of righteousness in place, and with your feet fitted with the readiness that comes from the gospel of peace. In addition to all this, take up the shield of faith, with which you can extinguish all the flaming arrows of the evil one. Take the helmet of salvation and the sword of the Spirit, which is the word of God. And pray in the Spirit on all occasions with all kinds of prayers and requests. With this in mind, be alert and always keep on praying for all the Lord’s people.” Ephesians 6:10

I will seek the Lord with all my heart, all my soul and all my mind.  I will ask Him to constantly search my heart and to remove anything unpleasing to Him. I will present my body as a living sacrifice to Him. I will not be conformed to this world, but be transformed by the renewal of my mind through His Word. I will ask Him to help me to become the person He created me to be and to love all people the way He would have me love them.  I will ask Him to allow His light and love to shine through me into a lost and hurting world to be drawn to Him so they may experience for themselves the awesome power of HIS AMAZING GRACE. I will put on the full armor of God and I will pray for all the Lord’s people. I believe this is the answer.  He is the answer. I find peace in knowing that as crazy as the world seems, God is in control.

1 Response to God Is In Control